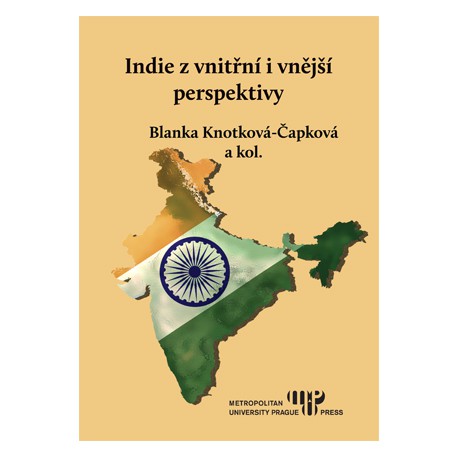 The aim of this title is to offer a complex view of the Indian politics. It focuses on select topics that have not been defined in this way in the Czech specialised literature until now. The chapter dedicated to internal political situation focuses on ideological and power tensions between the current dominant political bodies, the Indian National Congress and the Indian People’s Party, and the political-ideological currents that they represent. Thus, the chapter does not look into other important aspects of internal politics such as minority political currents, e.g. Muslim nationalism or religious movements that have been thematised in the Czech literature before. The investigated issues – similarly to the topics related to foreign policy of India in the second chapter – are explained with their historical context but the main focus lies on the development in the last two decades, which has been an unexplored area so far. The following chapter presents the perspective of economy and the developments of the economy policies in the 21st century. It is important that the chapter synergises both economic and Indological points of view as the author is an expert in both these disciplines. The chapter dedicated to gender relations, especially to the position of women in the Indian society, presents this topic not only as a description of facts but within the theoretical perspective of gender studies. The last chapter offers the point of view of sociology and social philosophy of Indian origins, which should lead to a deeper understanding of key questions of the Indian society as seen by “insider” specialists whose cultural-sociological experience arises from the Indian context.