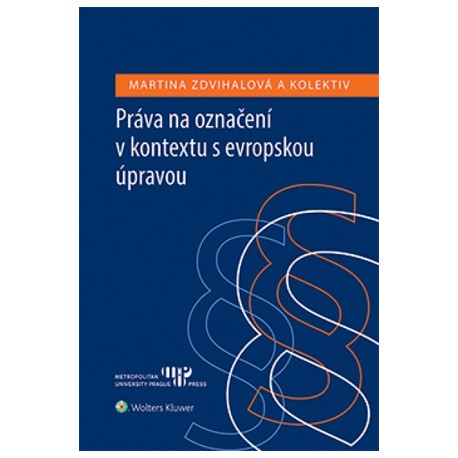 Presented publication analyses and interprets the rights to mark in the context of European regulation. The publication is divided into ten basic units, where the first chapter is focused on the rights to mark, especially on trademarks, including certification and collective trademarks, data on the provenance of the goods and products names, company names and domain names as trademarks. The second chapter subsumes the distinctive character or distinctiveness of trademarks, including the definition of the mentioned institute under the Czech and EU legal texts and regulations. Furthermore, the second chapter includes the classification of trademarks according to the degree of the distinctive character, also the marks which lack the distinctive character at all according to legal regulations and application practice and finally the institute of the acquisition of distinctive character according to the Czech and EU legal texts and regulations. The third chapter comprises the trademark registration process on the national level according to the Czech rules of law; the forth chapter is dedicated to the trademark registration process on the EU level according to the EU rules of law. The fifth chapter defines the effects of the trademark under the Czech legal system; the sixth chapter defines the effects of the EU trademark under the EU legal system. The seventh and eighth chapters analyse the appellations of origin and geographical indications on the national Czech and EU level. The ninth chapter very strictly interprets the legal means of protection of the rights to mark and appellations of origin and geographical indications, including the public and private law system of protection and out-of-court options for exercising above-mentioned institutes. The last chapter lists the most important and the most relevant international treaties relating to the above-mentioned rights and institutes, which are particularly important regarding the subject of this publication.