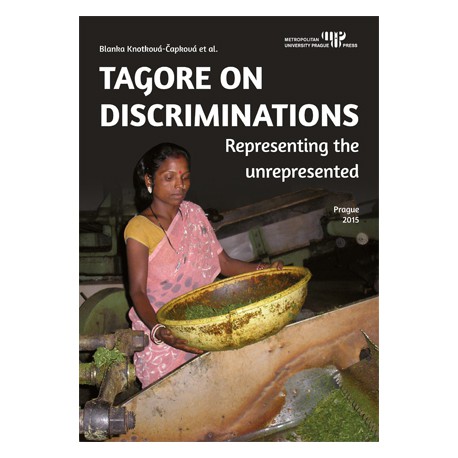 Tagore on discriminations : representing the unrepresented

Lots of books, academic articles, and essays have been written about Tagore (Rabindranath Thakur). This volume, of course, is not the first one to deal with the topic of representation of discrimination in Tagore’s work. First, its aim and focus is to conceptualize particular kinds of discrimination and marginalization within various contexts, such as the historical context of the Indian society of Tagore’s times, the biographical context of Tagore’s life, the philosophical context of his ideas or the comparative context of mutual reception of Tagore in the cross-cultural frame by foreign non-mainstream thinkers and scholars (e.g. Winternitz, Evola) as well as the context of Tagore’s reception of some cross-cultural concepts (e.g. nationalism, namely Japanese nationalism, or its comparative connotation for English literature). Second, the purpose is to theorize the issue of discrimination in Tagore’s texts from the perspective of contemporary theories. Thus, concepts exploring power hegemonies are employed throughout the book, especially the concepts of gender and class (in the sense of social status groups) and their mutual overlapping is discussed in detail. In this regard, some chapters as well as the Introduction by Sanjukta Dasgupta refer to multiculturalist theories, feminist theories, and the theory of intersectionality. Dasgupta also suggests an important interlink between the historical social discriminations and the contemporary situation.

In general, Tagore is perhaps predominantly treated as a universalist and a humanist. On one hand, this book emphasizes this feature of his writings too (nearly all the chapters relate this fact). Bashabi Fraser’s chapter focuses on Tagore’s philosophical visions, Arabella Unger pays attention, besides other issues, to a not so often mentioned aspect – i.e. Tagore’s non-anthropocentric concept of justice, which also concerns the rights of animals. Debabrata Chakrabarti comments on the method Tagore preferred – not a revolutionary change of the society, but a change carried out through reforms and education. On the other hand, the contributions in this book make attempts to avoid a simplified, schematized label of Tagore as a humanist and analyze particular topics on which they demonstrate a mixture of social criticism and conservative approaches, blending of which can also be found in Tagore’s texts. Igor Grbić suggests that comparisons of “humanist” Tagore and anti-modernist Evola should not be schematized as black and white and points to more subtle connotations of their attitudes regarding Japanese nationalism. Chhanda Chatterjee compares the radical attitude to social discriminatory hierarchies in Hinduism of three Indian political thinkers – B. R. Ambedkar’s radical refusal on one hand, and the reformist approach of M. K. Gandhi and Rabindranath Tagore on the other: “Gandhi and Tagore had not yet been disillusioned. Having come from the upper echelons of society they never faced the rejection and contempt of the society that Ambedkar had to face in real life. This can probably explain the persistently idealistic perspective from which Tagore regarded the whole question.”

A critical point is also formulated in Geraldine Forbes’s text. She appreciated Tagore’s refusal of the oppression of widows in Hinduism, but – comparing Tagore’s criticism to that represented by autobiographic experiences written by his female contemporary Haimabati Sen, she found Tagore’s approach rather theoretical and also one that applies traditional gender dichotomies: “Rabindranath not only overestimated the benevolence of the bhadralok class and underestimated the hardships women faced; he overlooked important experiments in his society to provide respectable employment for widows. […] What is especially interesting about juxtaposing Rabindranath’s fictional widows and those in Haimabati’s memoir is the rigidity of gender in Rabindranath’s Chaturanga compared to the fluidity of gender in Haimabati’s account.”

Traditional gender dichotomies in Tagore’s texts are also investigate chapters by Shefali Moitra, Dipannita Datta and Blanka Knotková-Čapková. Moitra, however, warns against oversimplified interpretations of Tagore’s texts, even when they are approached from a feminist standpoint: “Chitra, and resurfaced in the Chitrangada dance drama in 1936, bears witness to his serious engagement with this mode of empowerment. The play’s ending may not seem attractive to contemporary feminists, however. We must bear in mind that in the 1930s the ‘inclusion’ model of empowerment was the only available one; the radical option of constructing an alternative paradigm to patriarchy was not possible. Many questions relating to various forms of discrimination have been raised in Chitra, yetmost of them remain unanswered till date